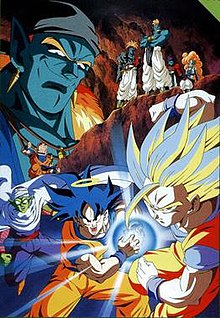 Dragon Ball Z: Bojack Unbound, known in Japan as Dragon Ball Z: The Galaxy’s at the Brink!! The Super Incredible Guy is a 1993 Japanese animated science fantasy action film and the ninth Dragon Ball Z feature movie. It was released in Japan on July 10 at the Toei Anime Fair, where it was shown alongside Dr. Slump and Arale-chan: N-cha! From Penguin Village with Love and the first YuYu Hakusho movie. The antagonist Bojack was designed by series creator Akira Toriyama. The film is the last to feature Kōhei Miyauchi as Kame-Sennin, who died two years after its release.

Please donate to keep the site up & running and subscription free. We are need of funds & your help and Support! (Collected $85/$575 for June!! Just Need 45 more Supports Donating $10 or more) for this MonthSure I'll Donate