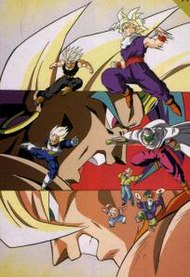 Dragon Ball Z: Broly – The Legendary Super Saiyan, known in Japan as Dragon Ball Z: Burn Up!! A Close Fight – A Violent Fight – A Super Fierce Fight is a 1993 Japanese animated science fiction adventure film and the eighth Dragon Ball Z feature movie. The original release date in Japan was on March 6 at the Toei Anime Fair alongside Dr. Slump and Arale-chan: N-cha! Clear Skies Over Penguin Village. It was dubbed into English by Funimation in 2003.

Please donate to keep the site up & running and subscription free. We are need of funds & your help and Support! (Collected $280/$575 for This Month!! Just Need a few more Supporters Donating $10 or more) for this MonthSure I'll Donate